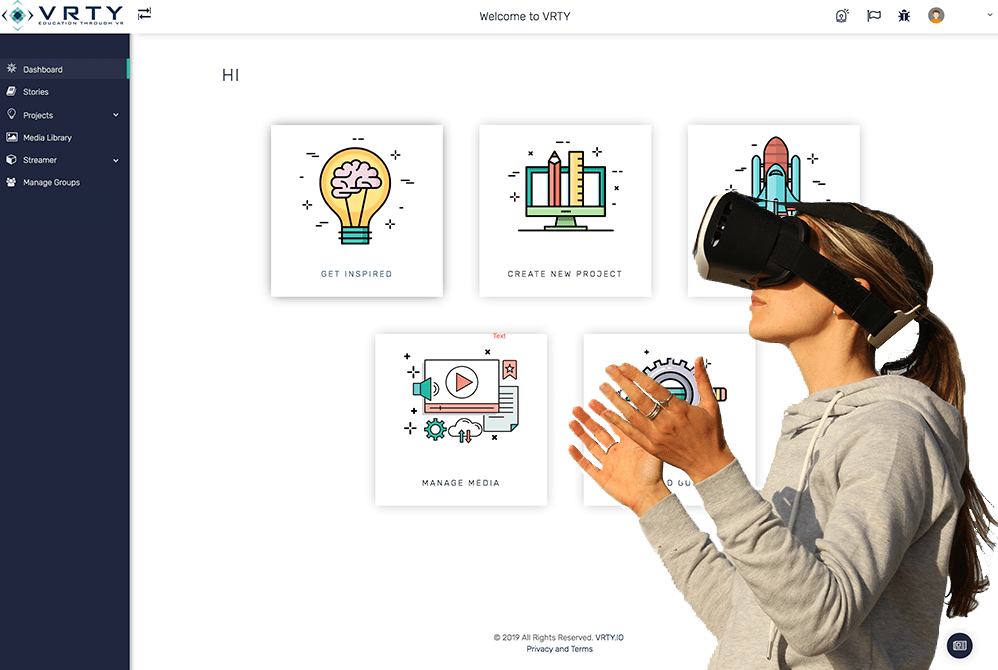 The Features of Virtual Reality

Virtual reality (VR) is one of the highest levels of multimedia application to this day due to its fidelity and real-time interactivity provide powerful support for system simulation technology. It is a combination of different types of technology which includes:

To begin the conversation, there is a spectrum of VR technology from low-end to high-end technology. Low-end VR technology uses smartphones to experience interactive VR and 360° using smartphone headsets or cardboard goggles and it is able to scale; high-end VR technology uses a powerful laptop that connects with a built-in VR headset and sensors that install into a room. Both sides of the spectrum have their pros and cons, VRTY is on the lower end of the spectrum to provide educators and students to create, build, share and scale VR curriculum-aligned projects in the classroom easily.

To make it simpler, we will categorise the features of VR into 3I: immersion, interaction, imagination and we will also add one more I for the immersive VR system.

Interaction refers to the user’s degree of manoeuvrability of objects in the simulated environment and the natural degree of feedback from the real environment. The human-computer interaction in VR technology is natural-like interaction. There are two types of interactions which are the three-degree-freedom (3DoF) interaction and the six-degree-freedom (6DoF) interaction. Normally, 3DoF is where a viewer can view a 360° image or video using a VR headset and move their head side to side to explore around; whilst the 6DoF requires a powerful gaming laptop or computer to process information to play and interact with using extra accessories such as sensors, data gloves and other sensing devices. The device adjusts the image and audio presented by the system according to the movement of the viewer’s head, hands, eyes, language and body. Viewers can inspect or manipulate objects in the virtual environment through natural skills such as their own language, body movements or actions.

Since the VR system is equipped with sensing and responsive devices for sight, hearing, touch, and kinesthetics, viewers can obtain various perceptions such as vision, hearing, touch, and kinaesthesia through human-computer interaction in the virtual environment to achieve an immersive experience. The research and development of VR are to expand human cognition and perception capabilities and establish a harmonious human-machine environment. VR technology is a perfect combination of humans and technology that is a product of computer graphics and human-computer interaction technology. Humans occupy a very important position in the entire system. Using the means of VR technology, we can get an “immersive” experience of the research object and environment, thereby enhancing the breadth and depth of human cognition, and broadening the “cognition space” and “method space” for humans to understand the objective world. Ultimately achieve a more essential reflection of the essence of the objective world.

There are two features of the immersive VR systems: High degree of immersion, the immersive VR system uses a variety of input and output devices to create a virtual world and allowing the viewer to immerse in it. At the same time, it can completely isolate the viewer without being affected by the real outside world; Highly real-time, viewers can achieve a parallel response from the real world into the virtual world. For example, when a person moves while wearing the gear and install sensors in a room, the spatial location tracking device from the sensors detects the movements in time, calculating it through the computer system, then outputs the corresponding scene changes in the virtual screen for the viewer to see. This change must be fast and accurately timed for the best experience on the flip side is that there will still be a slight time delay from processing all the information in the system.

Like this article? Be sure to check our other articles and other media appearances from our blog. You can also have the power to create and build a VR project easily in just a few steps. Sign up and get your free access to VRTY today. Have a question, we would love to chat with you.