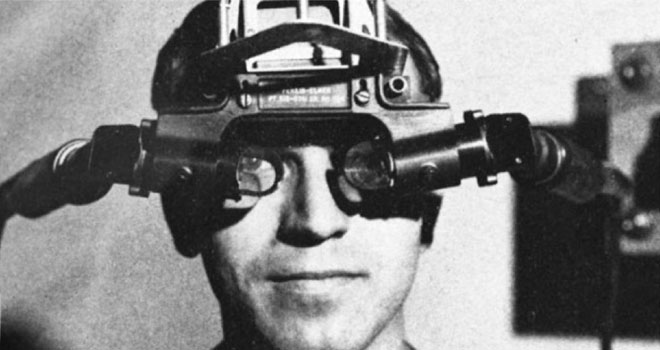 As technologies continue to improve, educators are finding more ways of using virtual reality to improve the way they bring to life learning experiences. So have you ever wondered about the history of VR and how it became the VR we all know today? Here is a short read on how it all began.

How VR Began and Developed

Virtual Reality (VR) is a technology that allows users to experience immersive simulated realities that may be similar or wildly different from the real world. First conceptualised in the 1980s, VR refers specifically to what was then a brand-new human-computer method of interaction created with the help of cutting-edge computers and sensor technology. The aim of VR technology was to use computer simulations to generate a virtual world in a three-dimensional space, offering sensory simulations to rouse users’ visual, auditory and tactile capacities. This three-dimensional experience would come together in a way that allowed users to feel like they were present in a computer-generated scene.

The first VR head-mounted display, The Sword of Damocles (Image from Virtual Speech)

The origins of VR can be traced back as early as the 1940s when the United States had started to design flight simulators. Thanks to advancements in computer technology, particularly in relation to computer graphics, these useful simulators had been developed to allow for large screen displays and the generation of panoramic scenes. The aim, of course, was to improve the skills of pilots and ensure the safety of air passengers, so computer experts worked hard to make the simulators as effective and close to real life as possible.

In 1965, Ivan Sutherland (often referred to as the father of computer graphics) made history by publishing a paper entitled “The Ultimate Display”, in which he described his idea to use a computer screen as a window through which to observe a virtual world. In other words, he sparked the world’s interest in VR and signalled his intent to spend time building new immersive technologies. In 1968, Sutherland came up with a design for a helmet-mounted, three-dimensional display device. Although it was fairly rudimentary, it laid the foundation for the kinds of three-dimensional display technologies many of us enjoy today.

Since Sutherland let the world know about his new invention, there have not been any major breakthroughs in the field. Interest in the field of VR has increased substantially, however. In fact, it was not until the early 1980s that tech guru Jaron Lanier formally proposed the term “Virtual Reality”, a time when a series of increasingly sophisticated simulated sensing devices (such as helmet-mounted j-dimensional displays, data gloves, data clothing and stereo headphones) hit the market, along with corresponding computer hardware and software systems. By the 1990s, research on VR technologies had become mainstream and was developing faster than ever before.

In the 1990s, a report written up by the Interactive System Project Working Group and funded by the National Science Foundation of the United States presented a more systematic discussion of VR, suggesting how the field could develop further and offering up ideas for research projects. Indeed, it had become apparent that virtual reality technology integrated a variety of different scientific fields such as computer graphics technology, computer simulation technology, sensor technology, display technology, and more. To ensure that users feel truly immersed in their virtual environments, developers had come to realise, VR needed to include information that inspired its users and permitted the option to interact with the virtual world. Put simply, it was understood around the 1990s that VR environments needed to succeed in three basic areas: immersion, vision, and interaction. This meant that the core focus of VR technology was centred around modelling and simulation.

The increased focus on VR by tech scientists in the 1990s meant that a special kind of VR fever started to spread around the globe. This was evidenced by the release of the VR novel “Avalanche” by Neal Stephenson and the movie “Grass Cutter”. Between 1992 and 2002, at least six major movies involved VR technologies, showing a world that was only just around the corner.

Virtual Reality in the 2000s

In the 2000s, mobile devices ushered in an explosion of interest in VR which is yet to wane. Products such as Sony’s 3kg VR helmet and Sensics’ piSight display device were just some of the new-fangled technologies to hit the market and bring VR to the mainstream. As interest in VR has expanded in the scientific community, VR has started to be seriously considered in medical research applications, as well as the aviation, manufacturing, and military industries.

Perhaps the most famous example of commercial VR technology in recent years is the Oculus Rift, which started life in August 2012 as a crowdfunding project started by 19-year-old Palmer Luckey. It won the support of 9,522 consumers and received $2.43 million in funds, enabling the company Oculus to quickly enter the development and production. By 2014, Oculus was acquired by internet giant Facebook for an amazing $2 billion, demonstrating VR’s potential as a lucrative sector.

In 2014, major companies began to launch their own VR products. Google released the cheap and easy-to-use Cardboard, Samsung launched Gear VR, and consumer-level VR began to emerge as a profitable sector. Thanks to the rapid development of smartphones in recent years, the prices of sensors, LCD screens and other parts required for VR equipment have been reduced, solving the profitability problems once associated with VR’s mass production and cost.

In the past few years, the number of VR entrepreneurs around the world has skyrocketed. According to Lou Chi, CEO of Fireworks Workshop, there were more than 200 VR hardware companies operating and turning a profit in 2014.

Although the promise and potential of VR are very clear, the field has been beleaguered with problems over the past few decades, having been labelled as costly to set-up and difficult to master. Even worse, some people could not find the tangible benefits of VR, with many starting to consider it a flashy gimmick. To change this perception and make VR accessible to everyone, VRTY was established in 2016.

VRTY is a powerful cloud-based platform designed to help everyone create, share and view their VR 360° content. It is about democratising VR and bringing it many benefits to the masses. The differences between VRTY’s solution and others in the field include:

The major difference between the VRTY platform is its easy-to-use functionality. Everyone can create VR content following three easy steps: planning a story, adding interactive markers and then sharing with the online community.

VRTY story planning builder helps the creator to map their VR experience end-to-end. This is very important as VR experiences are not created in the way that a traditional video or photo image would be. Rather, interactive markers are added to give the audiences an interactive, immersive experience. Markers can reveal information, images, videos, and sound, or transport audiences into a different scene. Creators can share their VR experience with anyone through a simple URL link, cutting out the need to mess around with YouTube. All the VRTY VR stories can work in your phone’s internet browser and can be shared via email, SMS, Facebook, WhatsApp or embedded on a website. Besides these easy steps, VRTY also provides analytics data for VR content in order to help creators find out information about their audiences. Use it to track interested viewers, set up multiple choice quizzes, or simply find out what viewers liked the most.

In the next article, we will be talking about the three fundamental characteristics of the VR environment system, which are immersion, interaction and vision.